My personal definition of “at scale” means a service handles more than 10,000 RPS (ten thousands requests per second). The reason I came up with that number is when I learned that the C10K problem is a solved problem and hardware is not the bottleneck anymore. Meaning that a single machine can handle 10,000 connections at the same time.

When I talk about scale, I talked about the scale of the product, not the amount of people building it. There are value and tradeoffs in both.

Why build a distributed system if a single machine can handle that much ? Because adding more people developing onto a centralized system can bring down speed of development to a crawl.

Which one to choose

Do you like complexity? By all means, choose a distributed system. Just remember that there are a lot more people capable of building a car than a car factory.

Iterating towards a distributed system

Would you dare to enter a building and go the 15th floor if you knew that it is a bunch of houses on top of each other glued together over time ? There is a picture that lots enthusiastic people talking about MVP (minimum viable product) like to share: 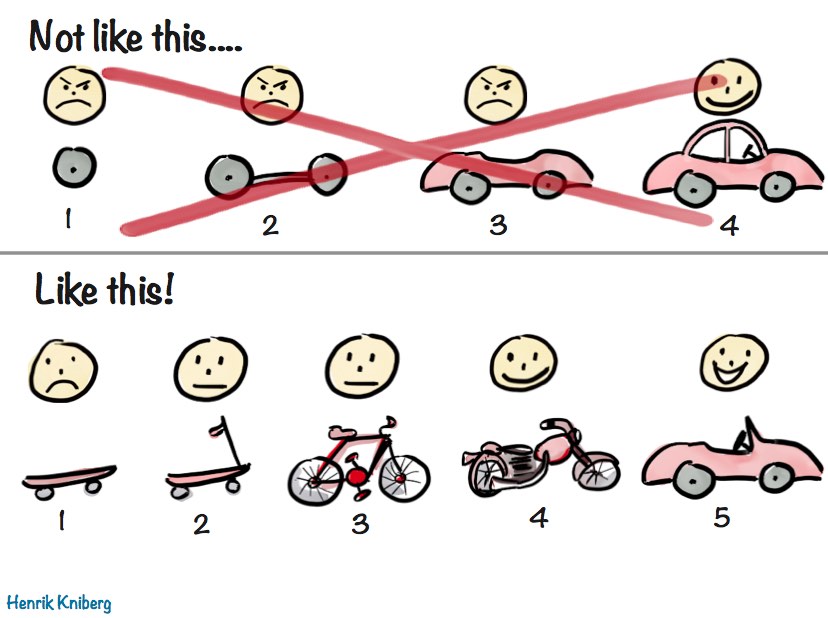 Note that all car manufacturers in history have started by making skateboards, then bikes to finally make cars. I will try to keep the sarcasm to a minimum but no promises. This mental model should work for the user interface that a company ships to their customers because a UI is viewed as a single system. I don’t think that mental model can be applied to a distributed system. I don’t think any car manufacturers started by making skateboards. The reason is: “They were too busy building car factories”.

Since a distributed system is a system of systems, one subsystem can grow significantly more than another. So the scaling limit of a distributed system is almost infinite. This brings its own set of problems that a centralized system can easily cope with. When distributed, the complexity lies into the dependencies between the systems which is extremely hard to codify and reason about for a human. Whereas a centralized system could potentially hide away the complexity by providing a superior layer of abstraction. The fact of the matter is this tradeoff is inevitable.

A distributed system is a system of systems that is an order of magnitude more complex than a centralized one. The tradeoff is the scaling capabilities versus the management of complexity. Not every company needs a distributed system if it doesn’t need to handle more than 10,000 RPS. Let’s be realistic about what we are trying to achieve. The rest will flow from there.